Getting to Highbury Jitsu 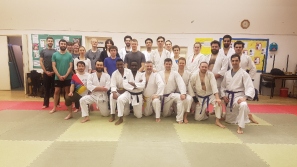 What type of Jujitsu is tought?

We are part of the Jiu Jitsu Foundation but teach and use techniques from other styles; Brazilian Jiu-Jitsu, Judo, Freestyle Wrestling and Self-defence.

Highbury Jitsu Club was founded in 2005 after 4 years at the Roundhouse we have now relocated to Sotheby Mews Day Centre.

Many of our students joined Highbury Jitsu Club without martial arts experience and come from a variety of different backgrounds. There is a good mixture of male and female students, and a wide age range from fifteen to forty something.

We are a not for profit and volunteer run club.

What is Japanese Jiu Jitsu?

Japanese Jiu Jitsu is derived from the feudal Japanese art of Jujutsu (also known as Jujitsu or Jiu-Jitsu). It is a practical and modern self-defense based martial art incorporating joint locks, strikes and throws to deal with almost any attack imaginable. With a heavy emphasis on using an opponent's size and momentum against them, Jiu-Jitsu is suitable for anyone; irrespective of age, strength, weight or gender. A history of our style can be found here.

Jiu-Jitsu also teaches moderated responses. An unjustified and unwanted grab does not warrant the same response as a knife wielding mugger.

What are the Techniques?

Jiu-Jitsu incorporates many types of techniques. Techniques are taught at the level appropriate to the grade of the student.

As students become more experienced they can progress to a higher belts by attending a grading. Gradings are held every 3 months and Sensei will announce details of the next one and tell you when you are ready to take it. Gradings are overseen by a Yondan (4th degree black belt) or higher, usually from outside the region, to promote impartiality.

The general requirements for grading are:

2nd Kyu - Dark Blue Belt : Nine new throws. Leglocks. Groundfighting with leglocks. Defences using a cosh. Defences from a baseball bat and multiple randomly armed attackers. Candidate must have held a Light Blue belt for at least 6 months and have a basic knowledge of First Aid.

1st Kyu - Brown Belt : Extreme breakfalling. Seven additional throws. Advanced groundfighting and full knowledge of TJJF Judo rules. Defence against any standard weapon, including knuckledusters, chairs and metal knives. Defence against Boxer attacker. Students must have held a Dark Blue belt for at least 6 months, hold a valid First Aid certification and passed the Club Instructor qualification. Brown belts are fully qualified to teach their own Club, at which point they are an Acting Primary Trainer (Shodan-ho) and are entitled to wear Hakama.

Black Belts are the next grades